Early last year, our client BNSF Railway began renovating its network operations center in Fort Worth, from which its 32,500-mile rail network is managed. BNSF dispatchers authorize the movement of every train across the network, in 28 states and three Canadian provinces, handling around 500 train starts a day. The nearly $20-million renovation of the operations center was completed toward the end of last year, including building a sub-floor beneath the center, so future electrical, heating and cooling work can be handled without disrupting operations. The center also has a hardened exterior shell of concrete – enough to pave a 12-mile, two-lane highway–to help protect it from tornadoes or other weather. The center’s TV screen covers a surface area equivalent to 240 55-inch wide-screen televisions — making it one of the largest single-span projector screen TVs in the world. You can see some of this on your little screen, by viewing a time-lapse video of last year’s construction work at the center, which has now been posted on the website of Progressive Railroading. 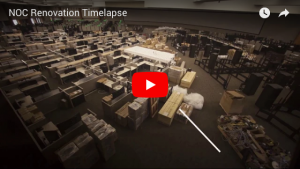