In John Cary’s recently published book Design for Good (with a foreword by Ursuline of Dallas alum Melinda Gates), there are case studies of public-interest architecture from all over the world. One of them features a project right here in Dallas: The Cottages at Hickory Crossing, a development that was built by the Central Dallas Community Development Corporation to house 50 chronically homeless people. There’s nothing cheesy about these cottages. The 400-square-foot homes were designed by the architecture firm bcWORKSHOP. Cary’s book points to the positive impact that having an individual unit, a separate home with its own door, has on formerly homeless residents. The cottages are on 5.5 acres south of downtown, near Malcolm X Boulevard and Louise Avenue. Funded primarily through local non profits and partially by contributions from both the City and the County, these remarkable homes were opened to residents near the end of 2016, but they were years in the making. One of the early steps, taken in 2007, was the creation of a visual identity for the project. Here’s that work, designed by SullivanPerkins: 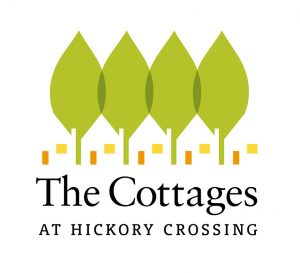 Images of the completed homes can be seen here.